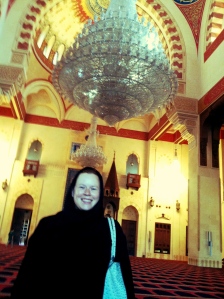 The highlight of Saturday was a walking tour of Beirut. We went inside two churches and one mosque. I had never been in a mosque before. The men in our group were able to walk right in after taking off their shoes. The women however had to put on black smocks and cover our hair with black scarves, which were all provided by the mosque. We put our shoes in a cubby along the wall. There was a huge gorgeous chandelier in the mosque and several smaller ones too. The mosque cost $22 million and was completely paid for by Hariri before he was assassinated in 2005. Hariri is buried right next to the mosque and there is a tent with lots of photos of him on display. Rafic Hariri was Prime Minister of Lebanon 1992-1998 and 2000-2004. He is regarded as a hero in Lebanon for reviving the country and especially the city of Beirut after the civil war.

Some other random things to note:

I learned that Pepsi has the corner on the market in Lebanon. Coke usually has less than 20% of the market. I can’t remember when exactly Coke pulled out of Lebanon, but I’m guessing sometime around the civil war and then they came back later than Pepsi. Also Pepsi gives store owners more incentives to purchase with them, like a free case for every ten you buy.

Everyone in Beirut drinks bottled water instead of tap water. For this reason bottle water is very cheap. My roommate and I bought 6 large 1 liter bottles of water for $3.

Also everywhere takes US dollars and the exchange rate is accepted to be $1 US for 1500 Lebanese in all small shops.

I’ve been surprised by how much French is spoken. But this has been a plus for me! I’ve used a little Arabic so far, but I know more French so I’m able to use that too.

Tonight we are going to a music festival so I’m going to get some rest before we go to dinner at 9PM! Tomorrow will be a long day too so I may not update for a while.